When do Cocker Spaniels Stop Growing? So, you brought a new Cocker Spaniel puppy back home. Well, first of all congratulations on being promoted to ‘Pet Parents’ of a beautiful regal pup that will grow out to be an adorable little loyal furball.

Now coming on to the main topic, sadly a puppy won’t stay a puppy forever. Slowly but gradually you will see both physical and behavioural changes in the pooch which will help him/her mature into a self-dependent canine. But how long does this growing phase continue???

A healthy Cocker Spaniel puppy will keep on growing in height until nine to twelve months of age, after which his/her muscles will grow until eighteen to twenty-four months. This is a general growing phase for these pups, however some pups may also experience longer or shorter growing periods.

So, until when a Cocker Spaniel is fully grown?

As a quote goes, “Rome wasn’t built in a day”, the growth of these little furballs doesn’t happen in the blink of an eye. Rather each step of their growth spans around a number of days and even months before you can see the ultimate result.

Apparently it takes almost eighteen to twenty four months for a Cocker Spaniel pup to stop growing both in it’s height and weight measurements. Afterwards, the frequency normally stays fixed, and may slowly degrade upon reaching senior years.

What are the growing stages of a Cocker Spaniel puppy to adulthood? 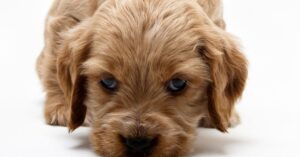 To make it easier to understand, let’s break them down into separate categories.

Starting with their newborn phase, this is when the puppies are born. They tend to spend most of their time sleeping and rest time getting plenty of nutrition from their mothers. Almost all of their energy goes in preparing their little bodies for survival in the outside environment and other necessary body growth.

Next, at about two to four weeks, their eyes and ears have fully opened. They can now see and hear sounds, although the development is still not fully complete. By interacting with their mother and other pups, they slowly gather intelligence and start standing and moving on their own.

The first set of baby teeth also pops out and they understand the concept of washroom.

Reaching four to twelve weeks of age, the Cocker Spaniel woofers will start socialising with their friends, mother and even human parents that they might be coming in contact with regularly. They start to understand things in a much clearer way than before and may show interest towards wet puppy food apart from their mother’s milk.

Now while puppies are born with different reproductive organs, their sexual maturity is not have full formed in their infant phase. Thus, until the sixteenth week, they will continue growing both physically in terms of height and sexually. This is when they have limitless bundles of energy and are the most curious of all times.

Anything and everything will be enough to make them curious and hence, often puppies of this age are very playful.

Upon reaching four to six months, the Cocker Spaniel pups will often exhibit emotional maturity which is nothing to be concerned of. Your gentle pup may suddenly display territorial aggression, get into fights with other pups, be fearful or keep on testing it’s siblings’ boundaries. This is how they learn important lessons of their canine hood and hence don’t interfere until it seems like they are out for blood (which happens rarely).

Just like human teenagers, puppies between six to twelve months may seem to have emotionally troubling episodes and hence be problematic. However, this differs from one pup to another and hence categorising all as one is never wise. During this time, some female Cocker Spaniels may go into their first heat with males becoming more receptive towards female pheromones.

Some pups may even try mating with each other and hence pet parents with male and female puppies will be required to keep them separately or spay and neuter them.

Moreover, physically in terms of height, this is until when a Spaniel puppy grows. Afterwards the growth is in terms of its thickness and weight.

Ultimately, as described before, twelve to twenty four months is the age when the puppy will attain its growth by thickness. His/her muscles will build up giving the pup a beautiful regal look, it is so famous for all over the world. Their coat will have a smooth shiny finish and they also have replaced their baby teeth by a set of sharp permanent teeth.

The Complete Guide to Cocker Spaniels

What does a fully grown Cocker Spaniel look like?

Arriving in an amazing cluster of the most beautiful colour combinations, a fully grown Cocker Spaniel has long fluffy ears, wide doe eyes, a tiny muzzle, a deep chest backed with tiny strong furry legs and a somewhat elongated body. Their tails are also covered with voluminous layers of fur, giving them a fluffy plushie look, which you can never get enough of.

However, when it comes to their height and weight differences, a male generally has higher numbers than the females, given their biological composition. So, while a male Spaniel will measure 15-17 inches in height and grow around 29-35 lbs, a female will be 14-16 inches high and 26-33 lbs in weight.

The same also depends on their lineage type. If the breed is a purebred, then they will mostly stick to the numbers mentioned above, however if they have mixed blood, the pups may associate characteristics of any parent.

What can I do to ensure my Cocker Spaniel pup grows healthy? Aside from their natural biological development, there are a few things to take care of if you have a growing Cocker Spaniel puppy at home.

So, this was all about the Cocker Spaniel growing phase. If you have any more doubts, you can share your questions in the comment section below and we will be sure to answer them soon. Thank you for reading, and take care.